A few weeks back I packed up a bunch of seedlings, strapped ’em to the back of my bike with an old rubber tube, and headed down to Surry Hills for the Artist as Family’s “Food Forest Plant-In-Day”.

As far as I understand it, the idea of a “Food Forest” is this: unlike your standard garden, it has an integrated system of layers: from large trees, to smaller trees, to an “understorey” and finally ground covers. All these elements work in tandem to support and nurture each other. The Food Forest, at its best, moves towards the state of a natural forest. In other words, it becomes stable and self-sustaining. Theoretically, it will require much less human intervention once it’s properly established.

Here’s a great drawing which I nicked from Wikipedia’s page on “forest gardening“. (I do believe Wikipedia might have nicked that picture from Bill Mollison’s Permaculture book):

All forests, in a sense, are “food forests”. I’m thinking of my recent visit to the Daintree in Queensland, where every plant, animal, fungus and bacteria was fodder for all the others: the whole system constantly gobbling and regenerating itself.

I’ve never visited one of these anthropocentric forests before. As an amateur gardener myself, I can well imagine the pleasure of Patrick, Meg and Zephyr as they planned and created their forest on the lawn outside St Michael’s Church on Albion street.

However, the Artist as Family lives in Victoria, so it can’t have been all that easy to establish a new garden so far away from home. This is no doubt one of the reasons they organised a plant-in day, inviting anyone who was interested to come along with something to plant.

There’s a great set of photos on their own website, here, showing some of the folks who turned up on the day.

And here below is a selection of my own shots… Many of the people who came along did not know the Artist as Family personally. They attended through their own curiosity, often due to a pre-existing fascination or interest in some aspect of urban gardening…

This is Todd, my classmate from the Permaculture course, whose business by day is “auditing strange things“. Todd is an enthusiastic gardener who lives down the south coast. He says he’s trying to change the culture in his local suburb – not by rallying or organising committees, but simply by being an example. He says, “I am trying to be the Joneses that everyone else will soon be wanting to keep up with”. At the Plant-In Day, Todd had an i-phone “app” which helped you to make companion planting decisions. This turned out to be surprisingly handy, as people kept arriving with lettuces, parsley, spinach, strawberries, and wondering where to plant them. Patrick and Meg happily handed over this advice-giving responsibility to Todd and his toy. Here’s Lisa, my neighbour from North Petersham, who brought along a small mulberry tree which had spontaneously erupted in her garden. Lisa has a long and abiding interest in nurturing woebegon trees – last year she did a wonderful project where she hand-reared dozens of the much-maligned London Plane Trees (you see them towering over the streets all over Sydney): Here’s Pete, who (to my knowledge) didn’t bring along anything particularly botanical, apart from the inevitable jokes about sneaking a few not-quite-legal plant specimens into the forest… Pete actually has much more knowledge of farming than I’ve ever really thought to tap into: Here are Tessa and Karl, from the group Makeshift (also participating in the In the Balance exhibition). By now, I’ve forgotten what they brought along, but I remember it was something a little eccentric. (Makeshift are in the process of finalising their mobile beehive-honey cart, from which they’ll be serving pancakes during the exhibition on the front lawn of the MCA.)
*[UPDATE – see the comment below this post for details of what Karl and Tessa brought along…] This is young Texas, who spent most of the time at the forest mastering the art of wheelbarrowing a bouncy plastic ball. Jo, his mum, brought along and planted a nice oregano. Here’s Adam – another of my classmates from the Permaculture Course. He and I were quite concerned that the soil at the forest site was rather poor, so we took it upon ourselves to shovel many barrows of mulch onto the plot, digging it through til it was mixed and more porous and airy. We then set to planting the seedlings I’d brought along: fennel, lettuces, and chinese cabbages. One of my favourite conversations of the day was with Francis the Pastor (see below, wearing the hat). He was thrilled with the project, saying for him its shape looked like “the Footprint of Jesus”.

You can see the shape he’s talking about, in plan, from one of the AAF’s drawings here: 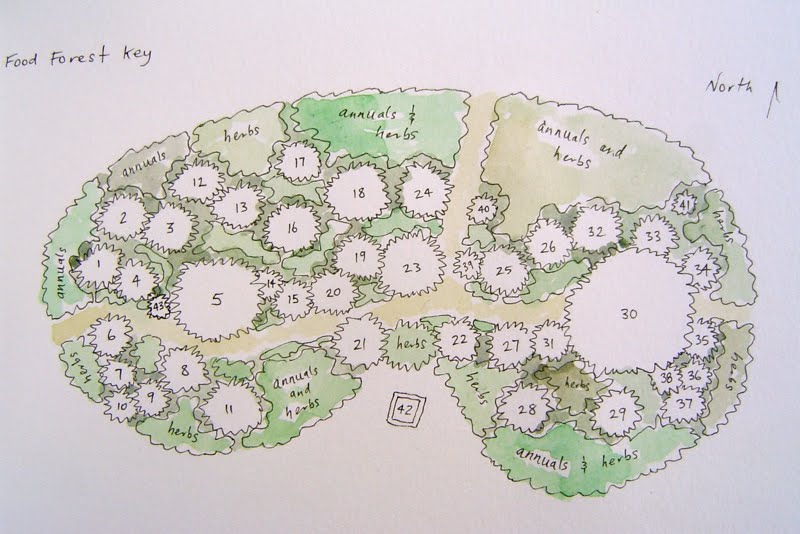 This cracked me up – I speculated that Jesus’ foot must have been encrusted with quite a lot of organic matter to create a garden this fertile. This led to a discussion of the Christian tradition of ‘the washing of the feet‘ as a possible method of getting more nutrient into the soil. But Francis lamented that these days, his parishoners attend church with feet which are already scrupulously clean, so the act is more socially symbolic than botanically useful. Standing next to Francis is Costa, the gregarious gardening guru from SBS TV. It was great to have Costa hanging around, gesticulating wildly and keenly to anyone he bumped into about the wonders of growing-your-own. Costa told me about his love of chickens – apparently he takes “his girls” along with him when he does gardening jobs, as conscripted workers to clear up weeds in one part of the yard while he works on another.

I asked Costa if he’d be able to bring himself to kill his chickens, when they reach “a certain age”. He was doubtful, especially since they all already have names (“Henrietta” is the only name I remember).

Oh, and here’s the Family themselves, in their classic “American-Gothic-but-Cheerful” pose, being photographed by Anna the curator: As I hinted above, members of The Family were quite laissez-faire in their approach to managing the Plant-In Day. Typically, the request for instructions from Meg or Patrick would be offered a rather open reply, along the lines of “Hmm, well, let’s see… Plant it where ever you think best”. We the punters were largely left to our own devices, scratching our heads and consulting amongst ourselves about what to do and where to help out. This may have been a little challenging at the time. In retrospect, I think it was an interesting strategy for forcing us to own our contributions – not just the action of planting something, but the decisions which we made via our own initiative.

For an artist group from out of town, this was perhaps a wise strategy. Once they leave (in fact, they’re already long gone) it’s up to us to tend this forest until it is strong enough to tend to itself.

7 thoughts on “To The Food Forest!”