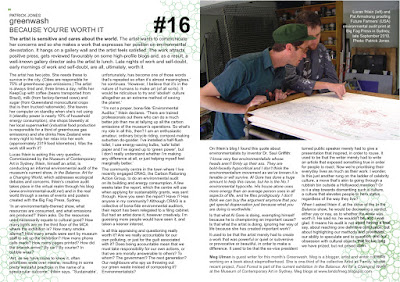 Meg Ulman of The Artist as Family has written an article in the Greenwash series about Environmental Audit and some questions it raises (so many questions, Meg!)

If you click on the above image, you can see the article in your browser window. Or you can read it over at Trouble Magazine, here.

At the end of her article, she writes:

I asked Ihlein if, at the close of the In the Balance show, he would be decreeing a verdict, either yay or nay, as to whether the show was worth it. He said no, he wouldn’t be, and I was glad. It means his audit is not about having a final say, about reaching one definitive conclusion, but about highlighting our methods and processes, our ability to speculate and question, and our obsession with cultural objects that for too long we have prized, but not prised open.

If you want to read the full text of the article, I’ve pasted it here below:

Greenwash #16
“Because youâ€™re worth it”
by Meg Ulman

The artist is sensitive and cares about the world. The artist wants to communicate her concerns and so she makes a work that expresses her position on environmental devastation. It hangs on a gallery wall and the artist feels satisfied. The work attracts positive press, gets reviewed favourably on some high-profile blogs and, as a result, a well-known gallery director asks the artist to lunch. Late nights of work and self-doubt, early mornings of work and self-doubt, are all, ultimately, worth it.

The artist has two jobs. She needs these to survive in the city. (Cities are responsible for 75% of greenhouse gas emissions.) The artist is always tired and, three times a day, refills her KeepCup with coffee (beans transported from Brazil), milk (from factory-farmed cows) and sugar (from Queensland monocultural crops that is then trucked nationwide). She leaves her computer on standby when sheâ€™s not using it (standby power is nearly 10% of household energy consumption), she shops biweekly at her local supermarket (industrial food production is responsible for a third of greenhouse gas emissions) and she drinks New Zealand wine every night to help her relax into her work (approximately 2319 food kilometres). Was the work still worth it?

Lucas Ihlein is asking this very question. Commissioned by the Museum of Contemporary Art in Sydney, Ihlein, himself an artist, is conducting an informal environmental audit of the museumâ€™s current show, In the Balance: Art for a Changing World, which addresses ecological debates and concerns. Ihleinâ€™s creative audit takes place in the virtual realm through his blog (www.environmental-audit.net) and in the real world through a series of events and posters created with the Big Fag Press, Sydney.

â€˜In an environmentally-themed show, what resources are consumed, and what emissions are produced?â€™ Ihlein asks. Do the resources used necessarily equate to cultural good? How many lights are on the third floor of the MCA where the exhibition is? How many smoke alarms? How many emails were sent by museum staff to set up the exhibition? How many phone calls made? How many pages printed? How did the artwork arrive? By car? By courier? In bubble wrap?

â€˜Art, as we have come to know it, often prioritises ends over means, resulting in some pretty wasteful practices in the name of a spectacular outcome,â€™ Ihlein says. â€˜â€˜Sustainableâ€™, unfortunately, has become one of those words thatâ€™s repeated so often itâ€™s almost meaningless,â€™ he continues. â€˜However, I believe that itâ€™s in the nature of humans to make art (of all sorts). It would be ridiculous to try and â€˜abolishâ€™ culture altogether as an extreme method of saving the planet.â€™

‘Iâ€™m not a proper, bona-fide â€˜Environmental Auditor,â€™’ Ihlein declares. â€˜There are trained professionals out there who can do a much better job than me at tallying up all the carbon emissions of the museumâ€™s operations. So whatâ€™s my role in all this, then? I am an enthusiastic amateur, ordinary bicycle riding, compost-making suburban do-gooder. Iâ€™ve installed a half-flush toilet, I use energy-saving bulbs, â€˜safeâ€™ toilet paper and Iâ€™ve signed up to â€˜green powerâ€™, but I donâ€™t really understand whether Iâ€™m making any difference at all, or just helping myself feel marginally better.â€™

The community centre in the town where I live recently engaged CRAG, the Carbon Rationing Action Group, to do an environmental audit on its building and energy consumption. A few weeks later the report, which the centre will use when applying for sustainability grants, was sent through. Have you seen the report? Have I? Has anyone in my community? Although CRAG is a collective of bona-fide environmental auditors, their report has been relegated to a filing cabinet. But had an artist done it, however creatively, Iâ€™m guessing more people would have seen it, and taken a keener interest.

Is all this appraising and questioning really worth it? Are we really accountable for our own polluting, or just for the guilt associated with it? Does being accountable mean that we must take responsibility for our own actions, or that we are morally answerable to others? To whom? The government? The next generation? Our neighbours who spy us throwing out our green waste instead of composting it? Environmentalists?

On Ihleinâ€™s blog I found this quote about environmentalists by inventor Dr. Saul Griffith:

I know very few environmentalists whose heads arenâ€™t firmly up their ass. They are bold-facedly hypocritical and I donâ€™t think the environmentalism movement as weâ€™ve known it is tenable or will survive. Al Gore has done a huge amount to help this cause, but he is the No.1 environmental hypocrite. His house alone uses more energy than an average person uses in all aspects of life, and he flies prodigiously. I donâ€™t think we can buy the argument anymore that you get special dispensation just because what you are doing is worthwhile.

Is that what Al Gore is doing, exempting himself because he is championing an important cause? Is that what the artist is doing, ignoring her way of life because she has created important work?

It used to be that the artist merely had to create a work that was powerful or quiet or subversive or provocative or beautiful, in order to make a difference. It used to be that the ex-vice president turned public speaker merely had to give a presentation that inspired, in order to rouse. It used to be that the writer merely had to write an article that exposed something true in order for people to react. Now weâ€™re prioritising their everyday lives as much as their work. I wonder, Is this just another rung on the ladder of celebrity culture, a move thatâ€™s akin to going through a rubbish bin outside a Hollywood mansion? Or is it a step towards dismantling such a culture, a culture that elevates people to hero status, regardless of the way they live?

When I asked Ihlein if, at the close of the In the Balance show, he would be decreeing a verdict, either yay or nay, as to whether the show was worth it, he said no, he wouldnâ€™t be, and I was glad. It means his audit is not about having a final say, about reaching one definitive conclusion, but about highlighting our methods and processes, our ability to speculate and to question, and our obsession with cultural objects that for too long we have prized, but not prised open.

Meg Ulman is guest writer for this month’s Greenwash. Meg is a blogger, artist and writer currently working on a book about stepmotherhood. She is one-third of the collective Artist as Family, whose recent project, Food Forest is part of the current exhibition â€˜In the Balance: Art for a Changing Worldâ€™ at the Museum of Contemporary Art in Sydney. Meg blogs at www.landofmeg.blogspot.com

One thought on “Greenwash / Audit”